I’m attached
to an outcome.

What if
the bus is late?
What if
I get to the airport
and the planes don’t fly
and the buses don’t run
and I’m stuck at the Kelowna airport
which isn’t in Kelowna.

It takes a while to sink into
“I will be with you always.”
and
“I have called you by name,
you are Mine.”

I take a deep breath,
let it out slowly.
I open to the possibility
of things going differently

and all being well. 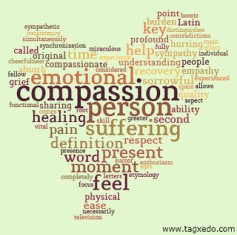 It’s not too late to join the Radical Compassion Challenge hosted by Tara Brach. It’s free from now until January 30. Each day includes 1) a teaching session and guided meditation on topics such as embodied presence, self-compassion, and self-forgiveness,  2) a daily compassion-in-action assignment, and 3) interviews with 10 thought leaders and visionaries such as Jon Kabat-Zinn and Krista Tippett. I particularly like Tara Brach’s RAIN meditation which is similar to the Welcoming Prayer.