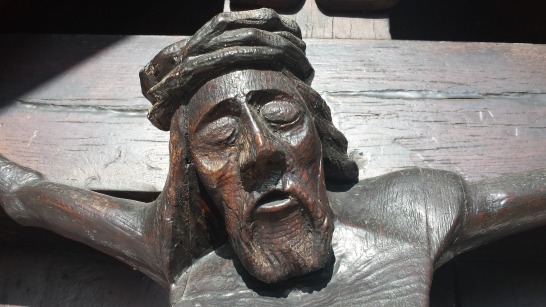 Then Peter came to Jesus and asked, “Lord, how many times shall I forgive my brother or sister who sins against me? Up to seven times?” Jesus answered, “I tell you, not seven times, but seventy-seven times.–Matthew 18:21-22 (NIV)

I always thought Jesus asked us to forgive so many times to match the number of offences. But lately, I’ve wondered if he also meant that sometimes we need to forgive a person who has hurt us seventy-seven times before we can actually let go of the offence.

“Consider this: Many people have trouble with forgiveness because they have been taught that it is a singular act to be completed in one sitting. That is not so. Forgiveness has many layers, many seasons. In our culture, there is a notion that forgiveness is a 100 percent proposition. All or nothing. It is also taught that forgiveness means to overlook, to act as though a thing has not occurred. This is not true either.

A woman [or man] who can work up a good 95 percent forgiveness of someone or something tragic and damaging almost qualifies for beatification, if not sainthood. If she is 75 percent forgiving and 25 percent “I don’t know if I ever can forgive fully, and I don’t even know if I want to,” that is more the norm. But 60 percent forgiveness accompanied by 40 percent, “I don’t know, and I’m not sure, and I’m still working on it,” is definitely fine. A level of 50 percent or less forgiveness qualifies as a work-in-progress status. Less that 10 percent? You’ve either just begun or you’re not really trying.

But, in any case, once you’ve reached a bit more than halfway, the rest will come in time, usually in small increments. The important part of forgiveness is to begin and to continue.
–Clarissa Pinkola Estés, Women Who Run With the Wolves, 369

I am encouraged by Estés words. I hear three things. First, forgiveness is complicated. It takes time and can’t be rushed. Second, I need to participate in the process. Third, it is received; God does the majority of the work.

I know where I need to end up: being able to do what Jesus did. He stood up, secure in who he was, then knelt down and washed his disciples’ feet–including Judas’. I know Jesus. He would have looked at Judas and loved him, even if Judas despised him. Even if Judas believed that Jesus was the enemy and needed to be taken down.

To look at my “enemy” and love them, that’s where Jesus is leading me. Every time I have tea with my rage, name and welcome my feelings, and let go of my desire to set things right, I get a little closer.

Seventy-seven times I need to let go of wanting to make my offenders see things my way, and trust that God will bring them self-awareness in time.

Seventy-seven times I need to release the debt of what they owe me into God’s hands.

Seventy-seven times I need to let go of believing that my healing is in their hands.

Seventy-seven times I need to release my guilt in this.

Seventy-seven times I need to surrender myself to Christ’s love and care.

And then one day, I will be released to love as Jesus loves and be reconciled to my brothers and sisters.

We trust that, despite all evidence to the contrary, God will accomplish God’s loving and redeeming purposes toward the fulfilment of all things in Christ.-–SoulStream

Many thanks to Brad Jersak. His article “Bury the Hatchet” walked me through what it looks like to let go and forgive. Brad is an author and teacher based in Abbotsford, BC and, like me,  a member of SoulStream, a dispersed contemplative Christian community. He serves as a reader and monastery preacher at All Saints of North America Orthodox Monastery. He also occasionally teaches at The Bridge in Abbotsford. Through his books and seminars, Brad shares the good news that God is Love, perfectly revealed in Jesus Christ. He is Editor in Chief of CWR Magazine, Faculty (New Testament / Patristics) of Westminster Theological Centre (UK)., Adjunct Faculty of St. Stephen’s University (New Brunswick), an author, and a blogger of Clarion Journal and CWR blog.

What love mischief are you and God doing to care for t earth?
Let me know and I will include it in an upcoming post.

Note: I won’t be posting anything new for Good Friday, Holy Saturday and Easter this year. But you are welcome to enjoy previously published posts from 2018, 2017, 2016. Have a blessed Easter.

2 Responses to Beginning to Forgive