Stop! In the Name of Love

The first thing you have to realize is that what you need to survive is killing you. That’s the tough part. There’s relief after a few big, hard swallows. Everything gets endurable. You can actually convince yourself that things are going to be okay even though you know in your gut that they’re not likely to.
—Saul Indian Horse

When playing hockey no longer provided an escape from the pain of the abuse he received from the residential school, Saul Indian Horse turned to drink. In so many ways, Richard Wagamese’s novel about an indigenous man who witnessed and endured endless atrocities is not my story. Yet when I read the quote above, I see what we have in common. Our addictions are killing us.

“Come on,” some of you will respond. “You don’t eat that much. And playing Scrabble by yourself on your tablet? That’s harmless.”

Perhaps my addictions are harmless to you in the way that Saul’s is to me, and you assume that I’m being hard on myself or overly dramatic. But let me put the truth another way: my addictions are robbing me of life.

Saul points out that indulging addictive behaviour delivers relief: the buzz I feel when I boot up the game, the pleasure I anticipate as I reach for the chips. I experience relief but not satisfaction. And so I want more.

After I preached one Sunday at the church where we raised our kids, I was invited to stay for coffee. They were celebrating the choir director’s birthday and asked me if I’d like some cake. After I politely declined their offer twice, I said, “I don’t always have the strength to say no to food I don’t need, so when I do, I’m going with it.”

“A moment on the lips, forever on the hips,” a dear friend piped up and chuckled. Her support made my truth real. How often have I convinced myself that this one piece of chocolate or that small slice of cake won’t matter?

Saul Indian Horse tried to ration his drinking, but it didn’t work. “The only way to really stop is to stop,” he confessed.

And the only way to do that, according to Marianne Williamson in her book A Course in Weight Loss, is through the power of divine love. “Only the power of love can overcome the power of hate,” says Williamson, “and make no mistake about it; your unhealthy eating is an act of self-hate. Overeating is an act of violence, and one of the mechanisms you are now dismantling is your habit of taking up the sword against yourself–whether the sword be a knife or fork.”

Williamson’s words hit me hard. I realized unhealthy eating is killing me. “You are realizing that food cannot nurture you emotionally,” she writes, “and that God, only God can.” God will help me receive love and give love.

I have nothing but extra pounds to show for the excess calories I’ve eaten and nothing at all to show for the hours I’ve wasted playing Scrabble alone. One evening, I was about to pick up my tablet and instead of thinking of it as a guilty pleasure, I saw it as an act of self-hate. I stopped and picked up a book instead. That book was Indian Horse. 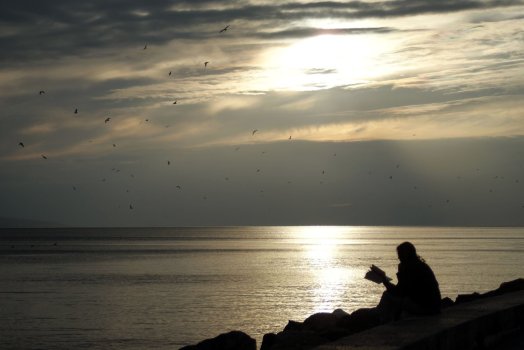 But me, God caught—reached all the way
from sky to sea and pulled me out
of that ocean of hate.
–Psalm 18:16 (MSG, adapted)

Richard Wagamese (1955-2017) was a Canadian author and journalist. An Ojibwe from the Wabaseemoong Independent Nations in northwestern Ontario, he was best known for his 2012 novel Indian Horse, which won the Burt Award for First Nations, Métis and Inuit Literature in 2013 and was a competing title in the 2013 edition of Canada Reads (Wikipedia). Indian Horse was made into a movie which was released in 2017. Wagamese’s life and writings have helped bring truth, reconciliation, and healing to our nation.

1 Response to Stop! In the Name of Love