“I’d like you to pray with #50 in the Spiritual Exercises: the sin of the angels,” my director instructed on the third day of my eight-day retreat. He also assigned three more prayer periods focussing on sin and hell, mine in particular. 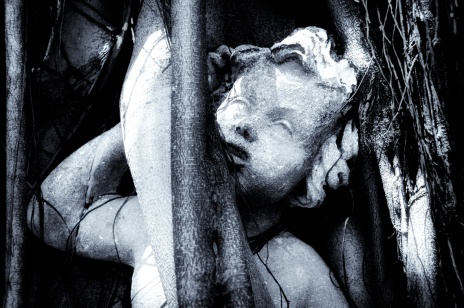 I groaned inwardly. I’ve never liked praying with these particular exercises, let alone assigning them to others. It’s hard not to believe that Ignatius wants to scare us into compliance.

I confessed that I didn’t have a literal view of hell; he assured me one wasn’t required. We both agreed that living in the illusion that we are on our own in this world is hell enough.

“I guess I’ll just have to trust Ignatius,” I said, causing the newly ordained Jesuit to raise an eyebrow.

I went back to my room at the retreat house at Queen of Peace monastery, closed the door and re-read Ignatius’ instructions.

As I sat in the silence, I pictured angels happily answering prayers, sitting by bedsides, and whispering God-thoughts.

Meanwhile, the angels who’d fallen were bitter and resentful. Their sense of abandonment compelled them to needle people until they woke up to the “reality” that they too are on their own.

How often have I been blinded by the illusion that God has abandoned me? I would have never admitted that or even thought it, but my actions spoke for me. And those actions hurt others.

I’ve fallen into hell. Yet every time I have, Jesus rescued me. I couldn’t imagine that he won’t also redeem the angels.

But I know enough about Ignatian prayer not to get caught up in theological arguments. Ignatius invites us to open ourselves to encounter God personally. What sin has been casting me into hell?

At one point on my bike ride to the monastery, I unintentionally went off the pavement onto gravel. I knew, with Gracie’s skinny tires, if I turned too quickly to get back up onto the pavement I could fall. I knew this from experience.

Once Fred and I were riding together when that happened; I ended up with cuts and bruises. I lost my temper and blamed Fred for misguiding me. That memory returned to me now in prayer along with other memories when I yelled at Fred or needled him with criticism. I felt ashamed and sorry for my actions.

Tears came–not from contrition–but from the realization that God and Fred had already forgiven me. For years now, God has been snatching me from the hell of my misbeliefs, quieting my anger and helping me be kind.

It wasn’t my confession that saved me from hell. It was God. Awareness of the impact of my actions was given long after God listened to the fear that drove my anger.

“Fred’s so good to me,” I told my director the next day. “He got up early to take my bike down the stairs for me.” Tears flowing, I told him what happened in my prayer.

He listened intently then gently pointed out that if I were Catholic and he was hearing my confession, he would assign a penance. “Is there something special you could do for Fred?”

A week after I returned home, we went back to Squamish to cycle the roads I’d told him about. But I still hadn’t told him about praying with #50 in the Spiritual Exercises.

As we strolled through the town, we saw a poster with an image of a woman dressed in a hooded red robe and roller skates. An event called The Squamish Inquisition was on that very evening. 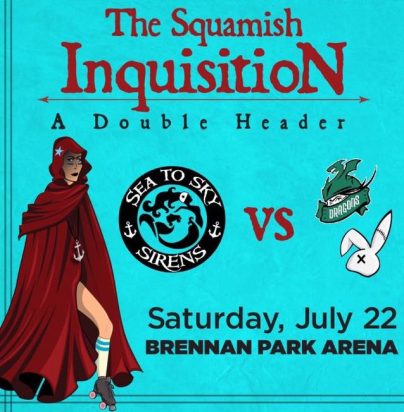 “Yeah, yeah, yeah,” he said. “My grandmother and I used to watch it on television when I was a kid.

I finally confessed to him what happened in my prayers and that going to roller derby with him was my penance.

He thought this was hilarious. “You need to write a blog post about this,” he said.

Penance number two. Now you owe me one, Fred.

Today, Fred, my siblings, and I ride the final leg of our 300 km bike trip from Jasper to Banff. Tonight, all being well, we’ll be soaking in the hot springs and recalling all we’ve seen: marmots, elk and bears; steep canyons, waterfalls, and emerald-blue lakes; and of course miles and miles of trees with one peak after another coming into view. I’m grateful for the love mischief of Parks Canada for protecting these beautiful places for all to enjoy.