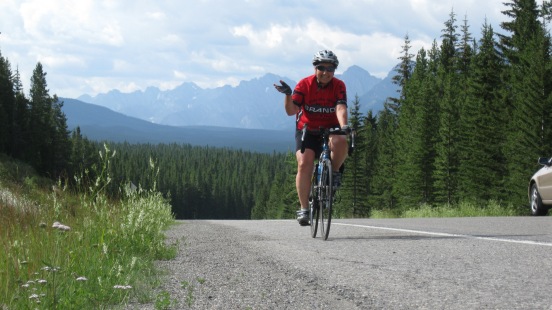 On July 6, I woke up oh darn early, packed my breakfast and lunch and kissed Fred goodbye. I took Gracie (my bike) onto the Skytrain then bus to Horseshoe Bay.

At 7:40 am, I clicked into her pedals and rode north with the Pacific Ocean on one side of me and trees, mountains, and streams on the other. Oh yes, and there were plenty of vehicles rumbling by on Highway 99 to Whistler and plenty of hills, too–forty kilometres of them. But there were less of both on the last leg of my pilgrimage along the bike paths to Brackendale and up Squamish Valley Road.

Sister Mary Regina had warned our little group coming to Queen of Peace for a retreat that bears were about, so I made sure to ring my bell occasionally.

This was going to be my third eight-day retreat with the other Ignatian directors. As in previous retreats, we would be in silence. Like the others, each day I’d see a director who’d assign four or five one-hour prayer periods. And once again, I had no control over what might or might not happen. My job was simply to open myself to God in the solitude and wait.

Glacier laden peaks came into view time and again as I cycled along the Cheakamus River. Aspen and fir trees shaded me from the midday sun and delivered me to the Dominican monastery on Cloudburst Crescent. I passed beehives, vegetable gardens, and meadows on the property then walked Gracie up the steep driveway to the monastery.

Sister Jean-Marie welcomed me in and suggested I sit in the chapel for a moment to catch my breath. I took off my cycling shoes and entered the sanctuary crafted from wood and stone. I was dumbstruck by the floor to ceiling window that framed the Tantalus mountains.

As I made my way to the retreat house, I was enfolded by even more beauty: flowers and hummingbirds, a bench by a cool stream, paths to explore and a spacious retreat house with big windows and another spectacular view.

But that was for later; all I wanted now was a shower. I stripped out of my sweaty spandex and lingered under the warm water grateful that my sixty-year-old body had gotten me here safely.

Dressed in fresh clothes and feeling deliciously clean and tired, I laid back on the couch and closed my eyes to rest.

I hadn’t even begun to pray, but God had already wooed me.

Come away, my beloved,
and be like a gazelle
or like a young stag
on the spice-laden mountains.
–Song of Songs 8:14

It’s one thing to come away on retreat for a week; it’s quite another to be called to a cloistered life. But God has done much love-mischief through the Dominicans who are an order of preachers. So it’s not surprising that both Sisters Mary Regina and Jean-Marie have written books. But so much of what the nuns do is preached without words. “We offer monastic welcome to those who are seeking a time of silence and prayer (cf. Monastic Welcome),” the sisters write. “By providing a beautiful sacred space where people can get away from the ‘rat race’ they experience the ancient monastic rhythm of life with its ebb and flow of liturgical prayer and silence. It is fitting that we should choose a place where the Creator of the Universe can speak to hearts in the midst of Canada’s awesome natural beauty.”

2 Responses to Come Away