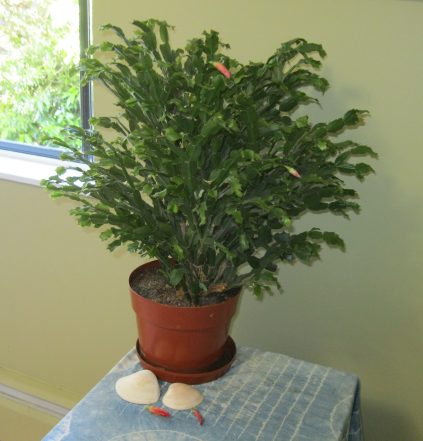 As many of you know, I have a Christmas cactus in the room where I pray, write, and offer spiritual direction. I love its quiet, faithful companionship. Nearly a decade ago, a friend grew it from a cutting and gave it to me in a tiny pot as a Christmas gift. Now it is over a foot tall and bushy with a woody stem and thick branches. For its whole life, this plant bloomed only in the appropriate seasons: Advent and Christmas. However, this year, as I’ve noted in my blog, it has “loved me back” exuberantly–blossoming through the dark days of Lent and into Eastertide.

I had adjusted to its dormancy through Pentecost and now in Ordinary Time, and then four pink buds appeared as summer began. I watched and waited for the flowers to open, but the first tight bud never did. Since I’d suspected that giving the cactus fertilizer regularly had helped it to bloom more during Advent and Lent, I gave it some more. But the next day, the second bud dropped.

I listened to my cactus friend like I listened to the tree and the lake. It asked, What has been going on in your life that my unopened buds invite you to notice?

I carried the question in my pocket, forgetting it was there until I felt a pang of guilt over a couple of untended relationships. I held both the weight of disappointing others and the squeeze of trying to fit everything in.

The dropped buds also spoke to me about wanting something to happen before its time and my incapacity to do anything about it. Whether it’s a piece of writing, a patch of darkness in a directee’s life, the ripening of forgiveness, or adequate housing for all our city’s citizens, I can’t force a blossoming.

Without buds or blossoms, my cactus is still vibrantly alive, keeping me company as I let go, once again, of trying to be more than I am, and as I wait for God to bring words, hearts, and justice to life. 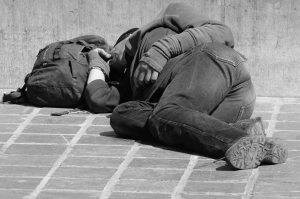 “B.C. Housing and the city are scheduled to build Burnaby’s first residence for people who are homeless by March 2019, the provincial government announced Friday,” says Lauren Boothby in Burnaby Now. “A new three-storey building at 3986 Norland St. will have 52 studio units for men and women, including seniors and people with disabilities, who are homeless and need support to address mental health or substance abuse issues” The Society to End Homelessness in Burnaby has advocated for this for a long time. So good to see this love mischief happening in my city.