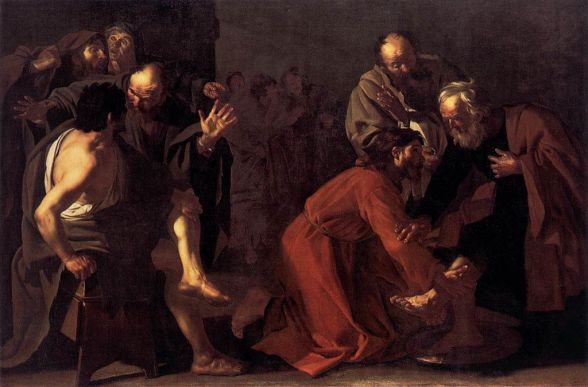 Perhaps it wasn’t until Jesus and his disciples sat down to eat their evening meal that they noticed the unpleasant aroma of street and feet. I can imagine them all, tired from the day, edgy and irritated with each other, avoiding eye contact with Jesus. Let someone else do it. And someone else did.

Jesus got up, and desiring to show them the depth of his love, took off his outer garment and got a basin of water. I’d always pictured a hush coming over the room at that point and each disciple quietly waiting their turn, but seventeenth century painter Dirck van Baburen didn’t see it that way.

In his scene, a cacophony erupts that sounds worse than their feet smell. An older disciple accuses a younger one of shirking his duty. A couple of the men lament, “How did we let this happen?” Peter argues with Jesus while Andrew interferes; Jesus argues back.

And who was going to wash their master’s feet? They likely debated about that, too.

Finally they settled down and returned to their cold dinner. Then Jesus unsettled them again. “I have set an example for you that you should do as I have done for you,” he told them.

And how did they respond? Canadians know about using their inside voice in situations like this. But not one of the disciples was Canadian.

“You can’t wash your own, Doofus. Didn’t you hear what Jesus said? We need to take turns. I’ll draw up a roster.”

Maybe it didn’t happen like that. Maybe after they all got their feet washed and experienced Christ’s sacramental display of love, their hearts were humbled and transformed.

Maybe. Maybe not. Or maybe not completely.

Jesus, I am just like them. You washed my feet and that very night I argued with my brother, fell asleep when you asked me not to, betrayed and deserted you.

You knew that would happen, yet you washed our feet anyway. 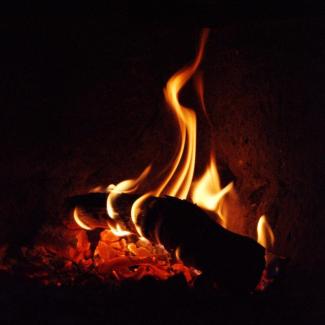 O living flame of love
that tenderly wounds my soul
in its deepest center! Since
now you are not oppressive,
now consummate! if it be your will:
tear through the veil of this sweet encounter!
— “Living Flame of Love” by St. John of the Cross

Questions for your journey into Holy Week:

Credits and references:
“Dirty Feet” by rbairdpccam. Used with permission.
Christ Washing the Apostles’ Feet Dirck van Baburen (circa 1594/1595–1624) [Public domain], via Wikimedia Commons
John 13:1-17
“Flames” by Tassoman. Used with permission.
“Living Flame of Love” is in The Collected Works of St. John of the Cross, translated by Kieran Kavanaugh, O.C.D. and Otilio Rodgriguez, O.C.D. with introductions by Kieran Kavanaugh, O.C.D. (ICS Publications, 1979)

1 Response to A Smelly, Sweet Encounter