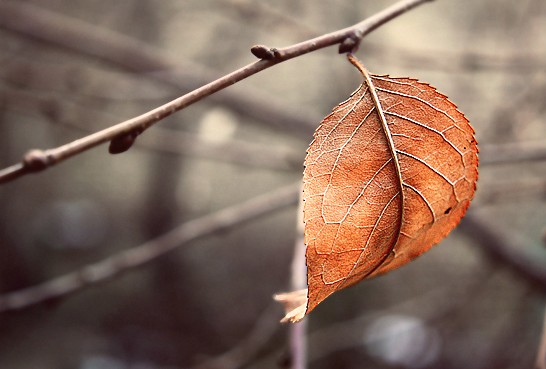 This picture called to me from the table covered with photos at a silent retreat earlier this year. I wasn’t sure why until I sat with it in prayer.

What stood out for me at first was the bronze colour. It spoke of the aged leaf’s beauty and worth. The nubs on the thin branch reminded me of lives spent. Soon there will only be a nub where this leaf once was. Though its days of photosynthesis are over and it has no more oxygen to give to the world, it’s still firmly attached to the branch–held, upheld, hallowed.

God had been listening to my thoughts again. Thoughts about aging and death come more frequently now when I notice changes in my parents and changes in myself. As I looked at the photo in my hands, God spoke to those thoughts. I am held. God is with me in this second half of life, revealing beauty that was not evident before, beauty that has nothing to do with what I can produce.

One day on our camping vacation this year, I noticed a sadness had settled on me. I listened to it and traced its source to a conversation I overheard while trying to go to sleep the night before. A fellow in the next campsite was talking about the long, steep and challenging trail he’d hiked. Fred and I have hiked trails like these in the past and were not up to tackling them this year. The sadness I felt made me realize I missed the thrill of bagging another peak.

I thought about the books I’d been reading: Richard Rohr’s Falling Upward and Khaled Hosseini’s A Thousand Splendid Suns. Their words, the trails we could hike, and the weather I couldn’t control invited me to find joy in what’s given instead of what’s planned and accomplished.

The ego clearly prefers an economy of merit, where we can divide the world into winners and losers, to any economy of grace, where merit or worthiness loses all meaning.

I always feared I would die wishing I had done more with my life. But I’m starting to see that there’s nothing big I still need to do, no more mountains I have to climb to prove myself. In this second half of life, without the need for winners or losers, it’s enough to know that I am held.

Mariam wished for so much in those final moments. Yet as she closed her eyes, it was not regret any longer but a sensation of abundant peace that washed over her. . . she was leaving the world as a woman who had loved and been loved back. —Khaled Hosseini, A Thousand Splendid Suns

Khaled Hosseini is an Afghan-born American novelist and physician. He has written three books set in Afghanistan: The Kite Runner, A Thousand Splendid Suns, And the Mountains Echoed. A year and a half following the release of The Kite Runner, he left his medical practice and devoted his time to writing. But that is not the only love mischief he’s been up to. He is currently a Goodwill Envoy for the United Nations High Commissioner for Refugees (UNHCR) and has been working to provide humanitarian assistance in Afghanistan through the Khaled Hosseini Foundation. The ending of A Thousand Splendid Suns told me what kind of love mischief Hosseini holds dear.