Here’s a story I wrote a few years ago that was published in the MB Herald. It’s also in my book, Stories of an Everyday Pilgrim, which will be available this fall. 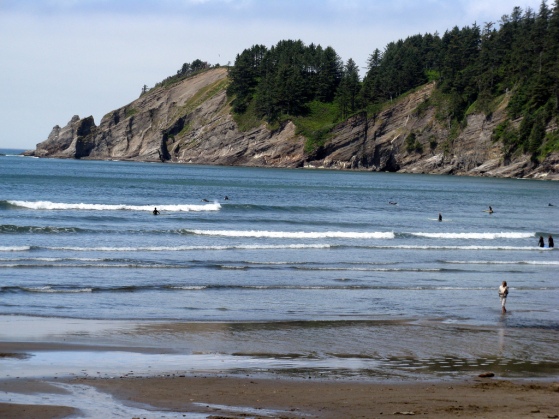 Fred and I sat contented on the beach and listened to the surf. We gazed at the ships on the horizon and watched kids and dogs—and surfers riding the waves.

“Doesn’t that make you want to get a board and go surfing?” he asked.

Neither of us had surfed before. When we were first married over thirty years ago, we used to scuba dive, so I know how much work it is to get into and out of a wetsuit. Then I considered the energy it would take to paddle through the surf, energy I wanted to save for cycling.

We had come to Oregon to cycle 250 miles of the coast with my siblings. A month before our vacation, both of us caught colds that dragged on for weeks and put us behind in our training. I was concerned that we might not have the stamina for it. Fred still had the occasional cough.

All this whooshed through my mind in less than ten seconds before I spit out a solitary “No” to his question. Fred said no more about it.

A few days later, we were on the beach again. We leaned against driftwood, and watched the surfers. Fred said, “You know, you can rent a wetsuit and surfboard for twenty-four hours for only forty dollars.” Then it hit me. Whenever Fred asks me if I’d like to do something, like he did a few days earlier, he really means he’d like to do it.

We checked out the surf shop in Manzanita with the advertised deal. They had plenty of boards and a suit in his size. On our bike ride back to the campground, I made one final appeal. “At least talk to somebody who knows what they’re doing and find out what you’re in for.” Once again Fred was silent.

The next day was sunny and hot. I biked to Oswald West State Park while Fred drove to the surf shop. We agreed to meet at the parking lot that led to Falcon Beach, a Mecca for surfers.

Half way up a long hill, when my calves were begging me to get off and walk, our black Mazda passed by with a surfboard lashed to the roof. Fred waved through the open sunroof window.

From the parking lot, we carried the surfboard down the kilometre long trail to the beach. “It’s heavier than I thought it would be,” he said, and we put it down periodically to catch our breath.

On the beach I huddled in the shade while Fred put on the wet suit, complete with mitts and a hood. He posed for some photos; then off he went. But he was back again ten minutes later. “The current’s taking me too far south,” he said. “I’m going farther up the beach.”

I watched him paddle out, duck the waves, and paddle some more. At one point I lost track of him. When I caught sight of him again, he was standing up. I threw my arms in the air and as soon as I let out a “Woo-hoo!” I realized it wasn’t Fred at all but another man with the same color surfboard.

Precisely one hour after he started, Fred announced, “I’m done,” and plopped down on the sand.

The next morning at breakfast, Fred said, “I still can’t believe I went surfing.”

I wondered if lying on and falling off a surfboard a number of times qualified as surfing, but I kept that thought to myself. “I’m just glad you didn’t injure yourself,” I said.

“Oh, I forgot to tell you. Some guy saw the surfboard on our car and asked me how the surfing was. I told him I didn’t know. It was the first time I ever tried it. ‘Oh, then,’ the man says. ‘The correct answer is: It was the best day surfing I ever had in my life.’”

And I could see by the smile on Fred’s face that it was. 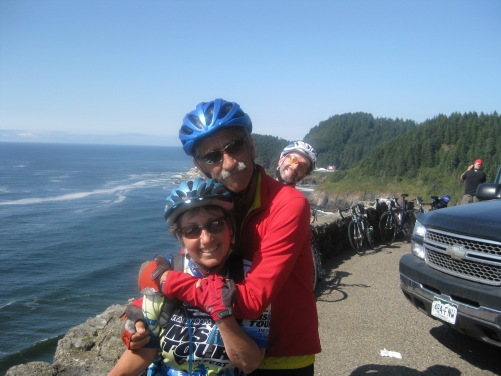 Fred and our grandson, Hadrian, watched “The Story of Stuff” together.

One more thing: I will be speaking at a women’s retreat in Nanaimo, B.C.
September 11-13. Details on “Events” page.