What My Heart Wanted to Hear

A friend asked
if I had written any poems about
loneliness.

Then I listened to
Brad Aaron Modlin’s poem
“What You Missed That Day You Were Absent from Fourth Grade”
and Pádraig Ó Tuama talk about it.

Tears came to my eyes.
I didn’t feel
so
alone.

I didn’t know I was
lonely
until this me-too
came along.

Now I know that
loneliness feels like
not being at home in your own house
not knowing how to pump gas or peel potatoes
being lost in the dark
and forgetting the sound of a loved one’s voice.

Loneliness is waking up to find
there is no Mrs Nelson
or even worse.
There is
but you were absent the day she said everything
your heart wanted to hear.

They are Mrs Nelson.
They come
to where you are. 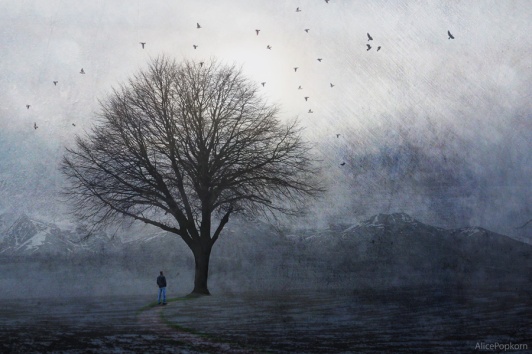 With That Moon Language

Admit something:
Everyone you see, you say to them,
“Love me.”
Of course you do not do this out loud;
otherwise,
someone would call the cops.
Still though, think about this,
this great pull in us
to connect.
Why not become the one
who lives with a full moon in each eye
that is always saying,
with that sweet moon
language,
what every other eye in this world
is dying to
hear.
–Hafiz

Poetry Unbound is a new series from On Being that invites you to “immerse yourself in a single poem, guided by Pádraig Ó Tuama. Short and unhurried; contemplative and energizing. Anchor your week by listening to the everyday poetry of your life, with new episodes on Monday and Friday during the season.” Pádraig Ó Tuama, is a poet and theologian who leads the Corrymeela community of Northern Ireland, an ecumenical community dedicated to reconciliation.

Esther is a spiritual director and writer. She lives in Burnaby with her husband, Fred, and they have two grown children and two grandchildren.
View all posts by Esther Hizsa →
This entry was posted in Childhood, compassion, Poetry, Reflections and tagged Alice Popkorn, Brad Aaron Modlin, Daniel Ladinsky, Esther Hizsa, Hafiz, Loneliness, Lonely Leaf, Love Poems from God, Mrs Nelson, On Being, Pádraig Ó Tuama, Poetry Unbound, Rob, spiritual director Burnaby, spiritual director Vancouver, What You Missed That Day You Were Absent from Fourth Grade, With that Moon Language. Bookmark the permalink.