“I have my passport,” Fred said on Sunday night, “but I can’t find yours.”

We were going to Bellingham, Washington the next day to pick up my books and have lunch with friends. We needed our passports to cross the border.

I’ll spare you the minute-by-minute anguish we went through as we looked everywhere we might have put it, knowing there really were only a few places where it could be. Fred ended up going online and getting a business licence as an importer/exporter and picked up the books the next day without any difficulty.

Meanwhile, I had an empty day. I spent it reviewing what I needed to present at Living from the Heart this weekend. I was grateful for the time to put everything in order unrushed. Fred returned tired but grateful for the lunch and conversation he shared with our friends and pleased that he had saved the day.

It sounds like an “Oh, well” story–shrug your shoulders and look on the bright side. But it didn’t start out that way. As I write this on Tuesday morning, it’s been thirty-six hours since we discovered my passport was missing. The adrenalin in my arms tells me my body is still bracing itself for what else might go wrong while the boxes of books in front of me raise an eyebrow.

Thirty-six hours ago, I was someone who doesn’t lose their passport and had things under control. Now I see I am not the person I thought I was, and it rankles me.

Something similar happened last week when I saw that I can be arrogant and bossy at times. A friend saw it too. When I apologized, she laughed and said, “I know what you’re like and can accept who you are.”

That didn’t make me feel good. I wanted her acceptance but I didn’t want her to validate my faults. She sent me a text later telling me how much she valued our friendship. That was sweet. I value our friendship too, especially her honesty, even though it’s humbling.

Here is God again, coming to my rescue, meeting me in my delusions about myself with scratchy self-awareness and loving acceptance. 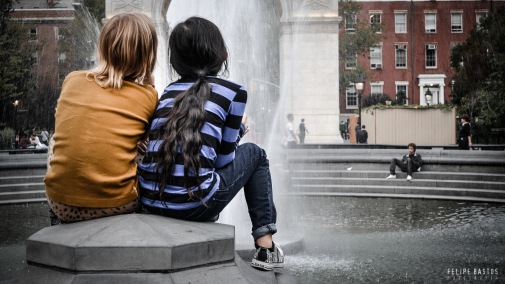 Brent Unrau, who also co-facilitates Living from the Heart, forwarded this video by The Kwerks who are a part of Southpointe, the church he attends. It’s so beautiful; it makes me want to “find my loud.” The Kwerks’ are Laura and Ryan Koch. Their website tells me they are “a married couple who dropped everything to pursue music, and in a few short years have built up an eager west coast fan base that has been itching for each new release they offer. The Kwerks’ warm harmonies and fresh folk sound will have you tapping your toe and singing along in minutes, only to realize the lyrics are as authentic as the duo’s straightforward acoustic vibe.”  Thank you, Laura and Ryan for the love mischief you do with God for the world!

Credits and References:
Photo of mural of little girl and balloon from Pixabay. Creative commons.
“Friendship” by Felipe Bastos. Used with permission.
Anthony de Mello quote from The Song of the Bird

1 Response to Fred Saves the Day