I Love You More than Anything

I love You more than anything.
And when I am in my right mind
I know this to be true
But You know it all the time.
—Rob Des Cotes

If actions speak louder than words, mine wouldn’t say I love God more than anything. They might say it’s true sometimes. Yet God knows–even when I don’t–that it’s true all the time. God isn’t angry when I turn to other loves but stays with me and patiently restores me to my right mind again.

I want to live in my right mind all the time and know what God knows: that I really do love God more than anything. For me, this means waking up to this reality in every moment.

“I think God is inviting me to live mindfully,” I told my spiritual director and waited for her response.

I’ve been seeing my spiritual director for some years now. She will question me if she thinks I am taking on a spiritual practice to earn God’s love or avoid a painful feeling.

She wasn’t questioning me now. Instead, she helped me explore this invitation. As I did, I admitted that being present to whatever I’m doing is often boring.

“I like being entertained and getting a break from the constant chatter in my head,” I said and told her that I enjoy snacking and watching a movie. But I don’t like what it does to my body, how it keeps me up too late and makes me not want to pray.

“What are you thinking?” I asked.

She was reminded of the story of the disciples in the upper room. They had locked the door yet Jesus came in and appeared to them.

My addictions lock me in. But that has not stopped Christ from coming in to free me. He is offering me new life, and this new life is going to take some getting used to.

I told her that I’m clear-headed in the morning, but by evening, I’m at the mercy of my addictions. I mentioned the Ignatian practice of making a plan while in consolation, so I know what to do in times of desolation. I was thinking generally; but she asked me specifically, “What’s  your plan for tonight?”

Yikes. It was a Friday. TGIF. I didn’t want to commit to anything but a pasta dinner and wine with Fred and kicking back. It was hard to make a plan and say out loud that I would pray and go to bed at a decent time. But it was easier to do it with the support of someone who loves me and doesn’t rationalize my addictive behaviours.

As I biked home from that session, I rode mindfully. I counted the revolutions each time my foot pushed down on the pedal. I tried to see how high I would get before I stopped pedalling. To keep counting, I had to pay attention to what I was doing. What a gift to realize that during the hour it took me to get home, I got a break from the chatter in my head.

Even though it felt boring, at nine o’clock I prayed for twenty minutes in silence, read something inspirational, prayed the Examen and the SoulStream Night Prayer, and went to bed. Then I did it the next night and the night after that.

Each morning, I was able to wake an hour earlier than I used to. I had an extra hour to pray and write at the time of day when I’m in my right mind. What a luxury that is.

Ignatius says, “All the things in this world are also created because of God’s love and they become a context of gifts, presented to us so that we can know God more easily and make a return of love more readily.” All things–including Netflix and Scrabble. I still enjoy these gifts, but less often and as a choice instead of a compulsion. And when I do, I enjoy them with God, and it’s the most important thing I do at that moment. 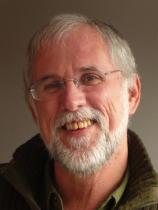 Rob Des Cotes founded Imago Dei Christian Communities in 2002.  He became a spiritual director, retreat leader and pastor of Imago Dei. He is the author of four books of meditations for spiritual direction, Fan the Flame, Higher Than I and Ultreia! (Go Higher) and the final book, Strength to Strength. Rob passed away on April 6, 2016, and as it says on the Imago Dei website, he “continued on a new part of the journey with his Father.” Rob was instrumental in making Christian contemplative writings and teachings accessible to all as well as forming community where contemplative practices can be lived out. If you do a search of his name on my blog, you will see some of the ways he has impacted my pilgrimage. He is deeply missed.

Credits and References:
Photo of woman on dock by Matthias Zomer from Pexels. Creative Commons.
Prayer by Rob Des Cotes,  written on October 9, 2014, for Imago Dei Communities.
Ignatius quote from The Spiritual Exercise of Ignatius of Loyola, Principle and Foundation, paraphrased by David L. Fleming.
Jesus with the children by Michael O’Brien. Used with permission.
Photo of Rob Des Cotes used with permission.