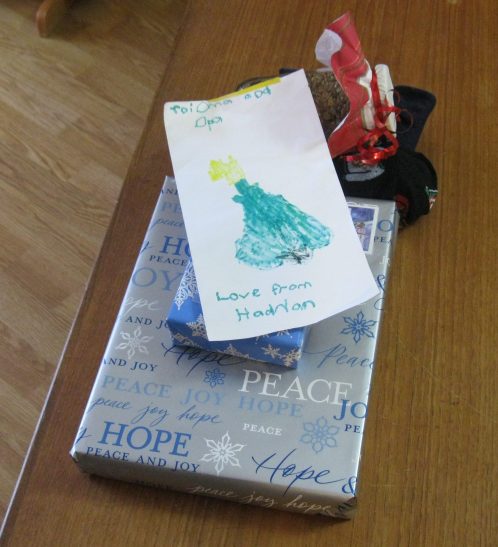 I didn’t intend to have an unsentimental Christmas. It just turned out that way. I enjoyed gatherings with friends and family, giving gifts of homemade granola, and watching A Charlie Brown Christmas again. But the tinsel and romance of the season left me cold.

This was the first Christmas–except for the three years when we sailed around the world—that we didn’t decorate a tree. Instead, we took the drawing of a Christmas tree that our grandson made for us when he was five and put some presents under it.

We have a sort of minimalist, half vegan family with married children who have in-laws, children and their own traditions. So “doing Christmas” isn’t straight forward. What made it even more of an enigma this year was my musing on our All Vulnerable God who came needy and helpless. I was frustrated by carols in which Jesus’ humble birth was  overshadowed by his soon to unfold kingly vocation. Add to that my annual angst over how we’re conditioned to celebrate Christmas versus how it happens.

When Boxing Day arrived, I felt a mixture of relief and sadness, having experienced Advent and Christmas somewhat as an outsider.

But before I fell asleep on Christmas night, as I opened myself to God, thoughts came to mind that brought tidings of comfort and (a minimal amount of) joy:

In a Christmas Eve sermon, April, our priest, said we often idealize the Christmas of our childhoods, even though many mothers can’t get through the stressful day without a melt-down.

On Christmas morning, I listened to Richard Rohr talk about the unsentimental self-emptying love of the Trinity that is like a water wheel constantly filling up and pouring out. The Incarnation reminds us that we are meant to be filled up and poured out for others.

Later that morning, Fred and I loaded into the car food, paper plates, napkins, and Christmas music and headed over to New Life Community Church. There we and others hosted a Christmas dinner for those in the Wednesday Lunch Club who are homeless or at risk of homelessness and would otherwise be alone for Christmas. My co-hosts were generous and the meal was a feast, but I hardly sat down. There were too many things to attend to. When it was all done, I was spent.

On Christmas night, Fred said, “It was a good day.” He too was exhausted. He had shovelled ice from the walk, coaxed a stubborn furnace to give us heat, set up tables and chairs, cleared dishes, and transported people. He had also had the challenge of cooking some donated venison. It turned out well, and he was able to sit back and enjoy the compliments and conversations.

But I found it hard to enjoy myself. I’m not a person who comes alive in the kitchen or gets a thrill out of organizing an event–even a small one like this. But I am a person who does it anyway because I love the people who come.

Linus would say, “That’s what Christmas is all about, Charlie Brown.” 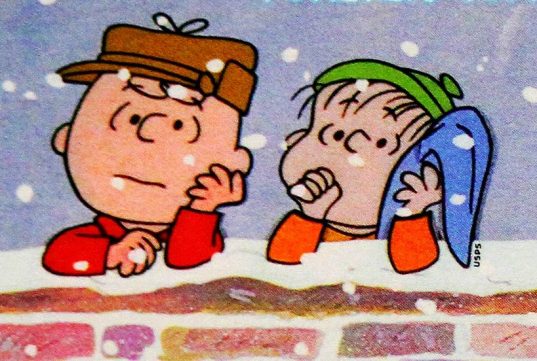 This is my commandment, that you love one another as I have loved you.
–John 15:12 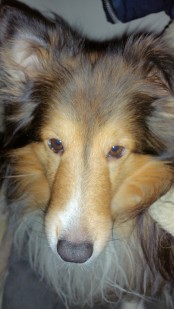 This is Coeur-y, the sheltie that saved our Christmas turkey. His human, Gail, who was cooking the bird for our Wednesday Lunch Club Christmas dinner, put it in the oven at 3 a.m. and set her alarm to wake in two hours to check it. Two hours later, she got up, checked the turkey and reset the alarm for two more hours. “About 45 minutes before the alarm was set to go off again, Coeur-y started barking and barking–loud enough to wake the dead,” Gail said. “I got up, followed the dog into the kitchen where it the smelled of cooked turkey. It was done. If Coeur-y hadn’t barked, the turkey would have been overcooked and dry. Yep, I had set the heat to 400° instead of 350.” Coeur-y’s registered name is “Sound of My Heart” and when we tasted that turkey, we could attest that he lived up to his name.