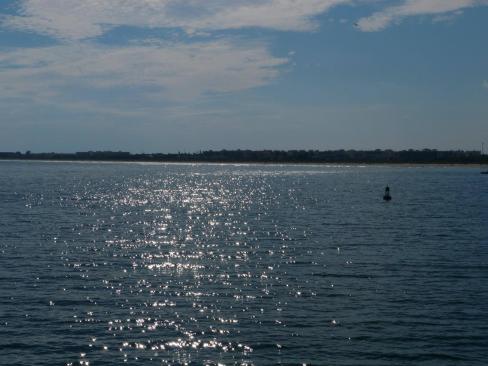 In March I was able to get away to Bowen Island for a few days of solitude. Often when I retreat there, I sit in the cottage watching the rain come and go. But this time it was sunny and warm.

As I quieted my soul and sat gazing at the ocean, I noticed how the sun shimmered off the water in the distance but not on the undisturbed water close to shore. Then a breeze caressed the water, and light dimpled and danced in front of me. Soon there was a shimmering path from heaven to earth that stopped at my feet.

Each day I saw the shimmering in the distance and watched the sparkling path emerge.

One afternoon I went to the other side of the island to Bowen Bay. The sea was beautiful and calming but didn’t reflect the light even though it was a sunny day. I listened to the sound of waves and birds; I read and prayed. After a while I noticed a dimple of light and then another. Within a few minutes I was found–a shimmering path of glory stretched across the water to me.

And that’s how God was with me on that retreat–no deep conversations, no profound insights, no new announcement–just a quiet shimmering, as if God was speaking to me in a new language.

A few weeks later, I was walking with a friend by the ocean. I struggled to be present and follow a conversation about a subject I knew little about. The cloudy day rendered the sea a dull brown. Then the sun peeked out from behind a cloud. The heavens opened and light shimmered off the water.

God was well pleased with us–delighting in my friend’s every word and grateful for my willingness to learn another new language.

And when Jesus also had been baptized and was praying, the heaven was opened, and the Holy Spirit descended upon him in bodily form like a dove.
And a voice came from heaven, “You are my Son, the Beloved; with you I
am well pleased.” –Luke 3:21-22

We all have diverse interests, gifts and ways we engage in love mischief with God. Near the end of tax season, a friend said to me, “I completed my ninety-ninth tax return today. I got paid for about half of them, but I don’t mind. Long ago I understood that God had given me a gift with numbers and accounting to bless others with, and I am happy to do it.”