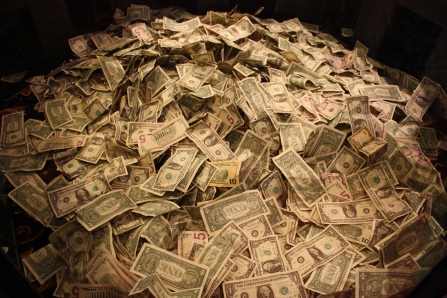 “My husband and I met with our financial advisor,” a friend said at a New Year’s Eve party. “He told us we’ve saved enough money, and we should start spending it.” After a life of carefully saving for retirement, she could hardly believe it: they have enough.

I wonder what it would be like to say that I have enough of anything: money, time, clothes, books, friends, accomplishments, comfort, love.

Do I really think I would be happier if I had more? Can’t I be happy enough, right now in this moment?

It all hinges on my believing that God is enough, and on God believing that I’m enough. As I write these words, my soul does a little happy dance. It knows: God is and you are.

Last week I told my spiritual director, “You know how a boat slows down and stops for a moment before the sails fill again, and it changes direction? I feel like I’m in that still place.”

Half a year ago, God asked me, “Am I enough for you?” I couldn’t say no. But I couldn’t say yes either. But now, God is not asking me. God is telling me, showing me, allowing me time to do nothing of great importance and feel satisfied. It’s strange, yet peaceful. I’m in no hurry for my sails to fill and for this boat to move on.

Better is a handful with quiet
than two handfuls with toil,
and a chasing after wind.
–Ecclesiastes 4:6

That rascal God, who can’t keep silent (Isaiah 62:1), is poking around in our lives, waking us up to reality: God is enough and we are enough.

Notice what God is doing in your life to show you that it’s true, and you will be doing great love mischief for the world. For more on that, read Richard Rohr’s daily meditations.