I was as restless as a cat. I’d pack a few things then check my emails. I looked over the list of items to bring to the SoulStream Partners’ Annual Retreat. Check. Check. What? A photograph of myself? Why hadn’t I noticed that before? Found one the wrong size; it would have to do. Pushed my nervousness aside. Checked my blog. Put my bag by the door. Ready, not ready.

The traffic was stop and go. I breathed in and out and arrived in plenty of time. Smiling faces welcomed me.

When everyone had gathered in the meeting room, we took turns introducing ourselves. After each introduction, we pinned the photo we brought to a board entitled SoulStream. Faces on the board and around the room reassured me: I belong here.

Over wine and cheese, I caught up with people I met last year and met new friends. I enjoyed the evening but woke in the night feeling anxious. I was afraid of something but didn’t know what. “Welcome it,” I sensed God say. “Listen to what it wants to tell you.”

With that, my fear curled up and went to sleep. 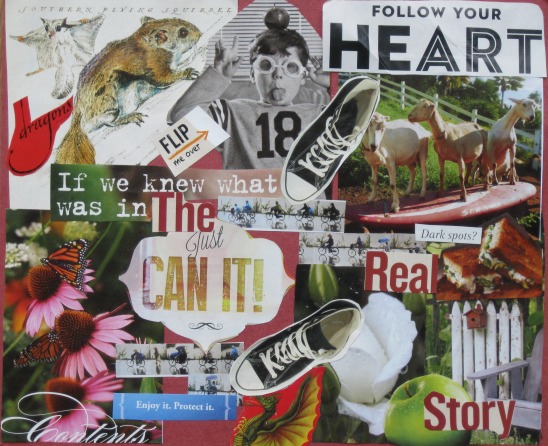 The next day I made a collage while my fear purred quietly on my lap. I was drawn to images and words that reconnected me to who I was before I went to elementary school, before I learned to recreate myself to match the approval of others.

A picture of a little girl wearing swimming goggles caught my attention. She had an apple on her head and stuck out her tongue. I could almost hear her giggles and sing-song, “Na, na, na, na, na.”

I cut out the phrases if you only knew what was in and the real story and glued them onto the page along with the word begins and a picture of a blue, blue ocean. 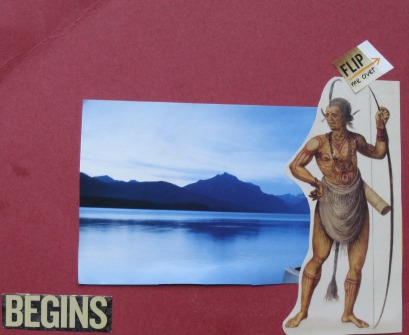 I felt as peaceful as that ocean for the remainder of the weekend. But the nameless fear returned when I got home. It meowed in the night.

The next day I was meditating on Peter’s miraculous release from prison in Acts 12. I imagined myself as Peter. The angel whispered, “Let’s get out of here.” The chains fell off and I stepped over the sleeping guards and out of the fear that imprisoned me. I knew it now: the fear of rejection.

I’m beginning a new adventure. God is leading me into deeper, bluer freedom that I haven’t known since I was a child. “Can you imagine the freedom of remaining who you are no matter what another face tells you?” God asks me. “That’s where we’re going.”

Thank You that You lovingly accept us as we are
and invite us to rest in the intimacy of that Love.
– from the Noon Prayer of the SoulStream Community

Esther is a spiritual director and writer. She lives in Burnaby with her husband, Fred, and they have two grown children and two grandchildren.
View all posts by Esther Hizsa →
This entry was posted in Childhood, Popular Posts, Stories and tagged Acts 12, belonging, community, freedom, letting the shy soul speak, listening to our fears, listening to our lives, SoulStream, SoulStream noon prayer. Bookmark the permalink.

8 Responses to The Real Story Begins