Praying in the Cracks

Not that long ago, the idea of spending time alone with God in silence was not even on my radar. But God knew how much I needed this and invited me to “pray in the cracks.” This post was originally published in 2013. I hope you enjoy reading it.

I went to my first spiritual director a dozen years ago while I was studying at Regent College.

After a few sessions my director said gently, “You have a lot of noisy, discouraging tapes playing in your head. I can’t compete with them.”

I swallowed hard. “What can I do?”

“How about praying in the cracks?”

“The cracks. The spaces that naturally occur in your day as you walk from one class to another, as you stand in line at the grocery store, or even as you wait for an elevator.  In those spare moments, instead of thinking about what you need to do next or trying to solve problems, just allow God to love you.”

“Sure,” I said skeptically.

“Trust me. If you pray in the cracks, it will change your life.”

As I walked from her office to the bus stop, I decided to try it. I began to pray and all kinds of thoughts flooded into my mind: things I should pray for, things I should do. Then I looked down at a crack in the sidewalk and stopped. Just allow God to love you, she had said.

Leaves—golden and red—caught my eye. Dry brown ones crunched under foot. I listened to the birds and the laughter in the distance, and I thought about being God’s beloved child.

After that, whenever I found myself waiting for anything (and remembered to pray), I quieted my heart and imagined God saying to me, “You are my beloved child, with you I am well pleased.”

In those cracks God deposited seeds of Christ’s kingdom. Before long I found myself relaxing in the shade of a mustard tree, with more freedom to pray and enjoy God’s presence.

A dozen years later I still pray in the cracks. And those old tapes? They’re not as loud as they used to be. 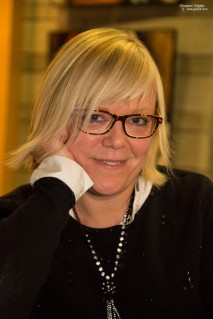 Lesley-Anne Evans is the Creative Curator at Metro Community where she works with street people in Kelowna, B.C.. One of her initiatives is a blog Holding Out Hope, which gives them a voice. She quotes Phillip Stanhope who said that many people would “rather you heard their story than granted their request.” Lesley-Anne says, “We are all created in the image of God, and therefore creative. I love to coming alongside others as they discover, engage, contribute and celebrate their creative gifts.” Lesley-Anne says what’s most meaningful to her is being present and listening. Through this, she has begun to experience the rawness of the street community and the gift of holding space without judgement.

Credits and References:
Photo from The Bean and Bear
Painting by Christian Asuh
Photo of Lesley-Anne Evans used with permission.

3 Responses to Praying in the Cracks