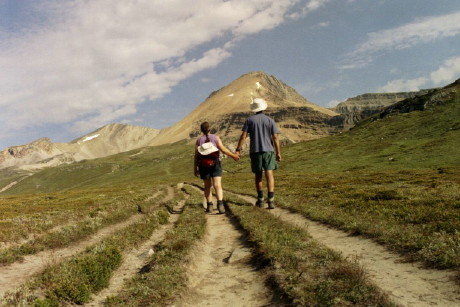 Lately I have been beginning my day with Pray as you go In these short on-line reflections, I am often asked to imagine myself with Jesus and interact with him.

One morning I was one of the women who followed Jesus. When I got close to him, I waited for Jesus to speak, but he didn’t say anything. He just took my hand in his and we walked on.

I returned to that image during a prayer retreat a few days later. In the silence I pictured myself walking hand in hand with Jesus again. I wondered what might unfold, when all of a sudden Jesus squeezed my hand like Fred does. It means: Stop. Look.

There was a deer in the bushes. She grazed so unafraid; did she even notice us? At that moment she stopped chewing and looked at us.  A sense of holiness rippled through me.

After the deer went on her way, Jesus and I resumed walking. Where were we going? I felt that stop look squeeze again. Someone was coming toward us. Groan. I didn’t feel like talking to anyone. Not then.

Jesus let go of my hand and stepped in front of me so that I was hidden behind him.

“Hey, how’s it going?” Jesus began a conversation that kept the person from noticing my presence. I listened and waited for the conversation to end, but it went on for some time. As it did, I leaned my head against Jesus’s back and listened to the “Uh-huhs” reverberate in his chest. His compassion made my heart soften toward the traveller, but I felt no compunction to be sociable.

Finally the person went on and, when out of sight, Jesus took my hand once more. I returned to the question I had on the road and also in life. Where are we going?

Then I realized, it didn’t matter.

Jesus, with you by my side
enough has been given.
– Soul of Christ Prayer by David L. Fleming, S.J.

Esther is a spiritual director and writer. She lives in Burnaby with her husband, Fred, and they have two grown children and two grandchildren.
View all posts by Esther Hizsa →
This entry was posted in Ignatian Spirituality, Praying with the Imagination, Stories and tagged Christian Asuh, Cirque Peak, David L. Fleming SJ, enough has been given, Fred Hizsa, Pray as you go, Soul of Christ, SoulStream, Strolling with My Honey.. Bookmark the permalink.