After the pharisee listed my faults publicly and loudly, I began to weep. It was all true. I prayed, “Lord God, have mercy on me, a sinner.”

My heart cracked open. I was now painfully aware of the extent to which my desires for pleasure, praise, prestige and power had hardened my heart and entombed my deepest desire. “Give me only your love and grace,” I prayed. “Let that be enough for me.”

When Edmund, the spiritual director for my eight-day retreat, had sent me back to pray with the parable of the tax collector and the pharisee, he said, “Be sure to let Jesus find you when you leave the temple.”

And Jesus did. He was waiting for me outside; he looked at me lovingly and took me by the arm. “Come with me,” he said. The next moment I was seated, and Jesus had a wash basin and towel. He was washing my feet. 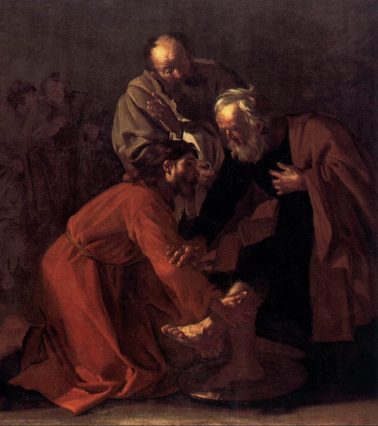 “No!” I protested. “I don’t deserve this.” But Jesus continued to bathe my feet. He was so close that I reached out and placed my hand on his head. He looked up at me, and I saw tears in his eyes. And then my hand was on his bearded cheek. And then he kissed my palm. That exquisite kiss sent such a profound wave of acceptance through me, that I could hardly stay in my skin. I wept and wept.

When Jesus finished washing my feet, I wiped my tears and opened my eyes. I was back in the chapel at Camel Hill. I still had fifteen minutes left in the hour allotted for my prayer, so I closed my eyes and returned to be with Jesus. As I did, I remembered that no one washed his feet at that last supper.

“Let me wash yours,” I said to Jesus.

“All right,” he said. “Meet me at Simon the pharisee’s house.”

And suddenly I was in that story, kneeling behind Jesus washing his feet with my tears and wiping them with the long hair I used to have as a child.

In my prayer, Simon turned out to be the same pharisee was who had humiliated me in the temple. He scowled at me.

Jesus saw it and said, “Simon, let me tell you something.”

Even though I know how the story goes, I expected Jesus to say, “She’s a sinner but she’s okay.” But he kept to the script. “Do you see this woman? I came into your house. You did not give me any water for my feet, but she wet my feet with her tears and wiped them with her hair. You did not give me a kiss, but this woman, from the time I entered, has not stopped kissing my feet. You did not put oil on my head, but she has poured perfume on my feet. Therefore, I tell you, her many sins have been forgiven—as her great love has shown.”

Now it was the pharisee who was stunned and humbled.

I was honoured and set free to follow my heart’s deepest desire.

Take, Lord, and receive all my liberty,
my memory, my understanding,
and my entire will,
All I have and call my own.

You have given all to me.
To you, Lord, I return it.

Everything is yours; do with it what you will.
Give me only your love and your grace,
that is enough for me.
– Ignatius of Loyola

Kudos to love mischief maker Kevin Lee for organizing Music in the Community on June 25. Kevin, who is a local opera singer, obtained a grant to promote neighbourliness in New Westminster. He and his long-time friends Heidi Braacx and Karina Inkster (aka the Cranky Molluscs) invited other local musicians to perform at Holy Trinity Cathedral. Artists included six talented soloists including one who composed his own song, the Newcomers’ Choir which Kevin conducts, the Heritage Uke Club and, of course, the Cranky Molluscs.